Me and my mom were out shopping at a mall in Sydney, Australia, we walked past a pet store, and a particular dog caught my mom’s eye. She was a chocolate labrador and had big, brown eyes. She was so cute! She was just a little puppy at the time. There was her and her brother. We were about to have a baby sister, so we wanted a female dog because male dogs are more aggressive than females. While we were looking at the pet cage another family came in, and asked if they could hold Coco. My mom was afraid that they were going to take her, so we told the retail clerk that we wanted to buy her. The retail clerk took Coco from the other family’s hands and gave her to us.

6 years later, Coco is truly a part of the family, and all grown up now. We got another dog too, a Husky, called Luna. My dad got a job at Disney in California,U.S, so now we have to move there. About 4 months in from the move to California, we took our two dogs on a hike early in the morning in summer time. Coco was a little chubby at the time, but Luna was healthy and fit. It wasn’t very far, about 4 miles. We didn’t know how hot and dry California was in summer until it was too late.

We started the hike, and at first it wasn’t too challenging. During the day it got hotter, and by 11 A.M it was already 95 degrees Fahrenheit. We kept on going, not knowing how tired Coco was at the time. Soon she started foaming at the mouth. We brought a doggy water bottle, and gave Coco some water, but it wasn’t enough. At 11:30 we found a ledge and rested in the shade. Coco was very tired at this point. She was foaming and it looked like she had rabies. Still we pushed on. We were so close to the end, but almost instantly after we started walking Coco wouldn’t walk. She couldn’t walk. My dad carried her the rest of the way. When we got to the car we took her in the trunk back home.

It was much cooler in the house. We thought she would just get better. We waited for a little bit, but there were no signs of her getting any better, other than the foaming had stopped. After that we took her to the vet. We carried her to the car trunk and rushed to the vet. When we got there the vet had to carry her on a stretcher to the hospital. We waited until about 10 P.M, until we got news from the vet that she had had a heat stroke, and that she may not survive. We drove home, heartbroken from the news and hoping that Coco would survive. When we visited her, she was conscious, but still very sick, and couldn’t move. She couldn’t even lift her head, all we saw her do was wag her tail when we talked to her and pet her. She was at the vet for 4 days, and they said she needed a blood transfusion, and there was nothing else they could do for her. We had to drive her to a specialist vet who said that if they do a couple of blood transfusions that she might survive. Even though it cost a lot of money, it was worth a try.

She was at the specialist for ten days,and they called us after the 3rd blood transfusion that she was well enough for her to come home. They told us that she was very lucky to be alive, and that she was a trooper. We were so happy! We got in the car right away, and when we got there, the nurse brought out a happy and excited dog that we thought would be gone forever. 2 years later, we learnt our lesson, and she is now fully-recovered, happy, and well. 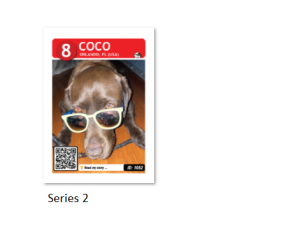