Take sneaky and shady play to the next level with this 1st Action Card Expansion Pack to the smash hit Shady Pets Card Game!  50% OFF – LIVE ON Kickstarter – CLICK HERE!

UNLEASH “THE WILD SIDE” is the 1st Expansion to the Shady Pets Card Game! Coming soon is the “Series II” of Shady Pets called “Pets Gone Shady” (More Pets/Stories/Cards). Both games play with the same rules;  both are highly strategic card games that requires you to play in a most shady way as you strive to correctly guess the identity of the mystery pets. It’s a little like Clue, Uno and Exploding Kittens. You have to steal, take, show, sneak peek, expose, ambush, stop other players, grab and even throw an occasional octopus at an opponent on your way to victory. When you add the UNLEASH “THE WILD SIDE” Expansion, you’ll supercharge the game play with some totally crazy and insane powers! For a limited time only, you can reserve Pets Gone Shady, the UNLEASH Expansion Packs, the Angry and Holiday Pet Expansion Packs …. 50% off – LIVE ON Kickstarter – CLICK HERE

Check out the excitement of these expansion cards: 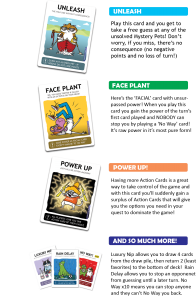 Be the first to review “Unleash Expansion” Cancel reply