Pets Gone Shady is a new and improved Series II version of Shady Pets. It’s a card game that’s a little like Clue and Uno except you get to throw octopuses, deal with naked turtles and avoid hangry hamsters! This creative, fun and strategic game delivers hilarious laughs for all!

Or order direct … select ‘add to cart’ below:

Pets Gone Shady is a highly strategic card game that requires you to play in a most shady way as you strive to correctly guess the identity of the mystery pets. It’s a little like Clue, Uno and Exploding Kittens. You have to steal, take, show, sneak peek, expose, ambush, stop other players, grab and even throw an occasional octopus at an opponent on your way to victory. As players take turns, the game gets more intense because, just like you, everyone is getting closer to solving the mystery pets, yet who is going play the best game, collect the most points and win the game?

Last year, we had a very successful launch of Shady Pets on Kickstarter. Many of our backers and customers loved the game (4.6/5 rating) and would often send us stories about their pets or would make inquiries about some of the pets we featured on the Pet Cards. We were inspired! We decided to create a new version (Series 2) of the Shady Pets card game called Pets Gone Shady that would feature the same basic rules but also include amazing stories behind every pet, more original action card artwork, expansion packs, pet packs and the ability to have every backer receive a free print and play card of their pet!

All of the Pets Gone Shady cards are compatible with the Shady Pets cards since they have the same card back!

What you’ll get in the base box … 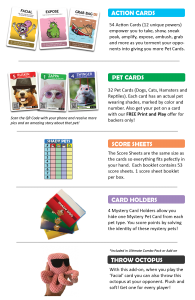 Here’s a few of our staff favorites … 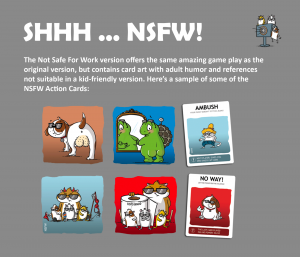 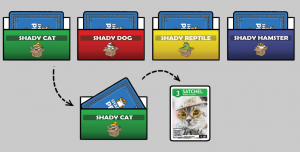 Be the first to review “Pets Gone Shady” Cancel reply